What to Do with a Pork Steak? 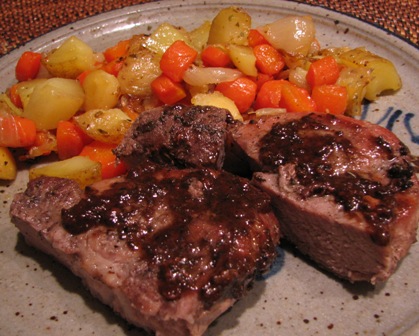 Before I bought meat in bulk, I had never heard of a pork steak. Either it simply wasn’t in my food vocabulary, or we just didn’t have them in the grocery stores in New Jersey where I grew up.

Once I started buying half a grassfed pig at a time, I learned about all kinds of meat cuts and loved the challenge of figuring out what to do with them. (See Fresh Ham Roast for another exploration in new cuts of meat.)

According to Wikipedia, the pork steak (also known as a blade steak) is cut from the pork shoulder blade (Boston) roast. The steak is flavorful and contains a significant amount of fat, which helps keep it moist while cooking. Because it comes from an active muscle location on the pig, a pork steak is less tender than some other cuts.

Key words: less tender. And with a grassfed pig, it’s important not to overcook a pork steak.

Here’s one way Bill and I like to prepare a pork steak:

A variety of root vegetables, such as carrots, parsnips, onions, and potatoes

Salt and pepper to taste

Heat oven to 375 degrees F. Peel and slice vegetables and place in oven-proof skillet. Drizzle with olive oil; sprinkle with salt and pepper to taste.

Place in oven for half an hour, stirring occasionally. When pork goes in the oven, turn heat down to 350 degrees. Roast until tender.

Remove meat from fridge about half an hour before cooking. Heat olive oil in oven-proof skillet on medium-high heat. Season meat with salt and pepper and liberally sprinkle with dried sage on one side.

Sear meat on the side without sage for 4 minutes. Turn meat over and sear for 4 more minutes.

Remove meat from pan and pour about 1/4 cup of dry red wine into pan. Deglaze, scraping up bits of meat from pan. Return meat to pan and cover with a lid. Place in 350 degree oven for 20 minutes. 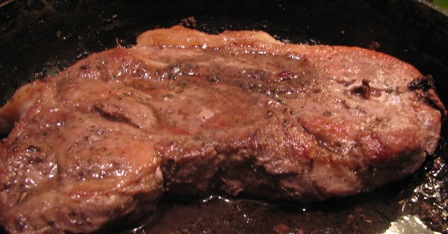 When cooked, let rest away from heat for two minutes with lid on. Put meat on platter and cut into two pieces. Reduce gravy by boiling on high heat for several minutes.

Pour sauce over meat and serve with root vegetables.

2 responses to “What to Do with a Pork Steak?”